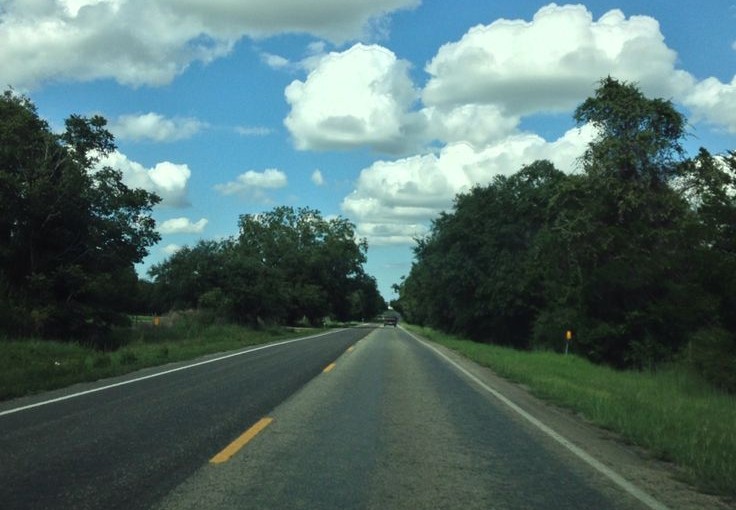 We rounded the corner of the house hurrying in Dad’s wake, staying back and a little behind as he cut his way across the yard and through the gap in the honeysuckled chain link fence and into the lot back of the tidy house on Riveredge Drive. He was moving fast and we chased him through the tall grass as he hurried toward the insistent hi-pitched screams that pierced the mid-morning calm. He went to a knee in the shade cast there under the tall green canopy of leaves hung on century-old gray pecan trees and reached down into the grass toward the source of the crying.

Our beds and books and appliances and in fact all that we owned sat poised for the journey to a new life in a rented boxbacked truck with the broad door slid closed and latched and the engine already idling in the driveway. And yet here we were, Brother and me crowding in and trying to see, trying to understand what had so startled Dad and jarred us from our internal struggle with saying goodbye to an old life and imagining the one to come. And then I saw it, naked and covered in fire ants, squirming and shrieking in complete panic with eyes yet unopened.

Dad picked her up—though we had no way of knowing then that she was a her—and brushed away the stinging ants with quick, gentle movements. She wriggled there in his cupped hands and slowly quieted as he held her to his chest, her skin pail and thin and pocked with venom.

He caught his breath and looked at the small helpless creature in his hands and sighed. “Now,” he said. Then he looked at us and shook his head. “My goodness.”

“What is it?” I asked, looking from Brother to him, and then back to the splotched pink thing in his hands.

Brother crowded in and reached out a finger to test the paperlike skin and paused and looked to Dad.

“That,” said Dad, rotating his hands for us to get a better look, “is a baby squirrel.”

One-fourth scientist and a full three-quarters kindhearted caretaker, Mom had a plan before Dad could protest. He and I set out in the rented truck as instructed. Mom and Brother followed in the brown family sedan, the new naked squirrel pocketed in a shoe box stuffed with rags and socks for warmth. I watched in the passenger-side mirror as Mom hooked a left into the K‑Mart in Rosenberg and I closed my eyes and wondered if they would both go in together or if she would leave Brother in the car with the windows down to sit the helpless newcomer.

The windows in the truck were down and there was no radio and we made the miles listening to the wind and not speaking. Somewhere after LaGrange, I saw the brown square sedan catch us up through my rearward view in the side mirror and I thought about the new naked squirrel and about how it was moving to a new place just like us, just like me.

We came into Round Top on the same two-lane paved road from the southwest on which I had first entered the village months before when Dad interviewed for his job at the school. We turned onto Mill Street and he slowed at the yellow Yield sign at the first cross street we came to and he said that’s the way the road signs used to be if there were road signs at all and he said if you ever come to a four-way Yield or Stop sign and another car gets there at the same time, that you should let the person on your right go first. He drove just past our new rented house and braked to a halt and ground the truck into reverse and backed in between the stepped red brick pillars that marked the driveway.

We put that squirrel in her box on the kitchen counter and piece by piece carried in the things that made the house feel almost like home. By the time the sun was setting we had decided on the name of Cracker and Mom had fed her twice baby formula from a glass dropper. Amazingly, Cracker survived.

She slept in her box on top of the hot water heater until she was furred and then we made a wood and wire hutch outside for her. When her fur was new and thin, she would lay out full on her belly like a superhero in flight and suck formula mixed with baby cereal from the dropper. She slept a lot and then she played and then slept more and played more. She got to know each of us and would hide in our clothes and play hide and seek in the living room across and under the couch. Brother fed her marshmallows and she would eat as many as you gave her and then one morning she chewed her way out of the hutch outside and she was gone.

She came back later that day to eat and so we took to leaving the hutch open with plenty of nuts and marshmallows inside. As time passed, we would see her less and less, but she would sometimes come to her name and eat treats from our fingers. She took up residence with a fine fat male in the hollow oak across Mill Street and raised at least two litters of babies that I witnessed before we built a new house and moved out of town later on.

We didn’t have to help that squirrel. We had 100 things to get done on move day and stress was running high. But when all our plans and expectations were interrupted, Mom and Dad made a great decision. The reward was months of joy watching Cracker grow, and years of pride in knowing that we had helped a defenseless thing get a start on life, and that from that little helpless, wounded, crying baby came more babies into the world, right there in Round Top, Texas.

It’s kind of funny, what you can learn from a squirrel. That no matter the circumstance, even if you think you are unable, always take time to help the helpless. You never know but that your act of kindness may go far beyond changing the life of another. In fact, it just may change you.